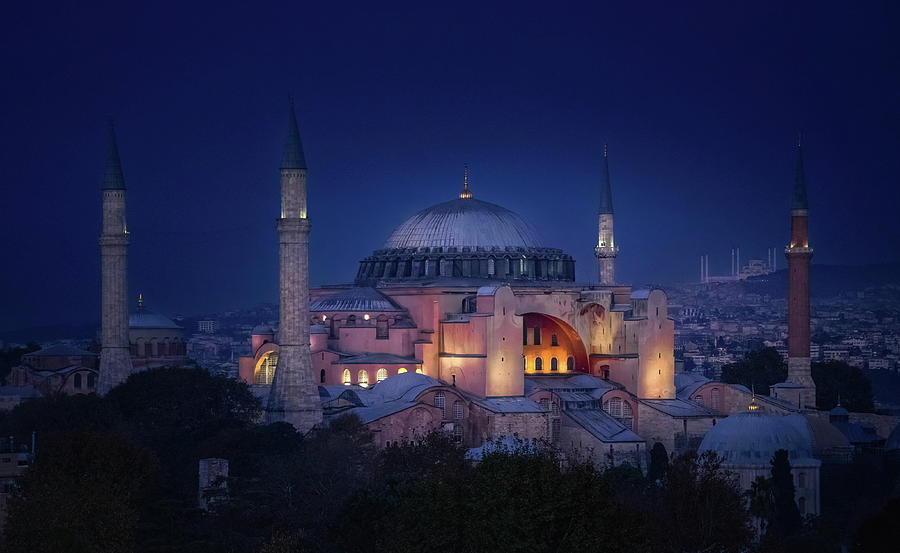 Hagia Sophia was originally built as a Christian church for the Roman Empire during 532 and 537. At the time it was the world's largest indoor space and one of the first to have this type of dome ceiling. One of those most prominent examples of Byzantine architecture having changed the history of architecture.
Having changed hands on more than one occasion, including serving as a museum for decades, since 2020 it has once again become a mosque and is a major historical and cultural site in Istanbul, Turkey. The Hagia Sophia Mosque has been a UNESCO World Heritage site since 1985.
This beautiful image was captured shortly after sunset during the blue hour when the Hagia Sophia is softly lit against the deep blue Turkish sky of Istanbul.

Love this city and this capture is a beauty!

This is so beautiful!

Such a beautiful evening capture! L/F

Supervision with the beauty of the divine light

Congratulations! Your beautiful work has been selected for special recognition in Pretty In Pink, Blue or Purple Group’s Administrator’s Picks under the Discussion tab! Please feel free to post thank you’s under the home page features thank you thread!

Bravo, your outstanding work has been featured on the homepage of the FAA aRt diStrIct! You are invited to archive your work in the feature archive discussion